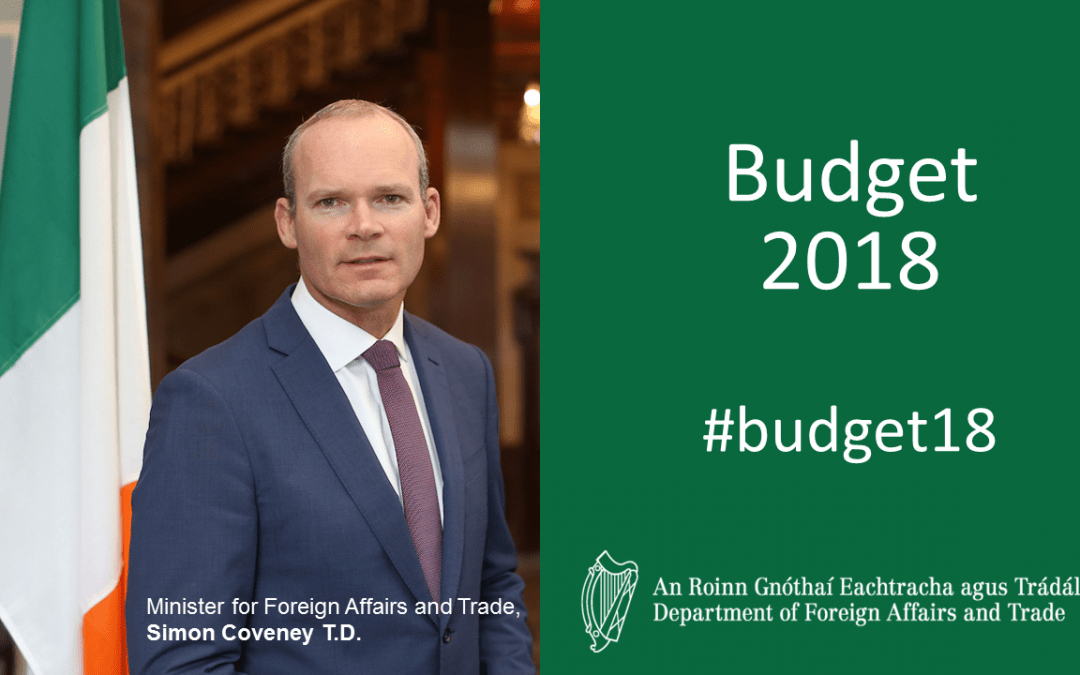 The Minister for Foreign Affairs and Trade, Mr. Simon Coveney T.D., has today announced that Ireland will open new resident diplomatic missions in Chile, Colombia, Jordan, Vancouver and Mumbai as part of the Government’s overall Budget 2018 package. Additional funding will be directed towards augmenting Brexit resources, following recent steps to increase staff numbers working on Brexit at HQ and in major European capitals like Brussels, Berlin, Paris and London.

“The announcement of these new Irish Embassies and Consulates are important first steps in expanding our global footprint and diversifying our trade portfolio as we prepare for Brexit.

The new Embassies in Santiago, Chile and in Bogotá, Colombia will assist in promoting trade and investment with both countries. Chile is a high-income country, the most competitive economy in Latin America, and enjoys the region’s highest investment rating.  It is a promising emerging market for Irish companies in a number of sectors including technology, higher education, telecoms equipment and renewable energy.With almost 50 million people, Colombia has doubled its per capita income over the past decade. Ireland’s trade with Colombia has tripled since 2012 and a number of Irish companies are already active there. A Free Trade Agreement with the European Union ensures ease of access for Irish exporters and investors.

We also plan to open an Embassy in Amman, Jordan, a highly strategic location in terms of our work and investment in the Middle East.

The opening of a Consulate in Vancouver in western Canada reflects the strength of the Ireland-Canada relationship, the growing economic importance of that region and also the fact that there is a large Irish community now living there.

The addition of a Consulate in Mumbai, India’s commercial capital, will significantly strengthen our presence in another of Ireland’s key strategic partners. We exported almost €3 billion in goods and services to India during 2016 and the new Consulate will allow the establishment of an Ireland House to facilitate even greater engagement by our State agencies throughout the western region of India.

With Japan already our largest trading partner in Asia for services and a growing market for our food exports, and building on potential offered by the new EU-Japan Economic Partnership Agreement, the Government has also provided the funding to begin work next year on a new state-of-the-art Ireland House in Tokyo, which will position us to take advantage of these opportunities.”

On additional measures to address the impact of Brexit, Minister Coveney said:

“We have already taken steps to augment our Brexit teams at my Department in Dublin and in Brussels, Berlin, Paris and London and towards ensuring that our Embassy network across the EU is closely coordinated around this absolute priority issue for Ireland.

This Budget puts those measures on a sustainable footing and allows us to further augment our Brexit team as the process continues.

We have benefited greatly from the decision to maintain an Embassy in every EU Member State, even during the financial crisis. The wisdom of that decision has been plain to see since the UK’s Brexit vote. I now want us to go further and to look at expanding our diplomatic and economic footprint across a European Union which will remain, by far, the most important market for Irish goods. I hope to bring proposals in this respect to Cabinet in the coming months.”

“I am pleased that today we are increasing our overall ODA budget by €26 million to just over €707 million in 2018. This represents an increase of 4% on the revised 2017 budget level and will be the third consecutive year in which we have increased ODA allocations. This will bring the Irish Aid budget over €500 million for the first time since 2012

The Government is strongly committed to Ireland’s overseas aid programme and to its place at the heart of our foreign policy.  In 2015 we allocated just over €600 million and the 2018 amount represents an increase of over €100 million or almost 18% in the past three years.

We also remain committed to making incremental, sustainable progress towards the UN target of providing 0.7% of GNP in ODA. As the Taoiseach has said, we need a clear roadmap towards the achievement of this target and I will be bringing proposals in this respect to Government early next year.”

Speaking on the impact for Cork of Budget 2018, Minister Coveney said:

“Fine Gael is using Budget 2018 to give everyone in Cork a fair chance and the opportunity to reach their full potential. A big part of this is the reform of the tax system announced today in Budget 2018 and which will really benefit people and families here in Cork. This is something that my constituents have been calling for, and something Fine Gael members around the country have been asking Government to prioritise.

“Fine Gael in Government is delivering for families and we are giving a little back to those who have had to make sacrifices during what were very tough times for our country. The gains we have made since the dark days of the recession are hard won and they are fragile, especially in the context of Brexit. However we are in a position to protect our economic recovery and use some of the resources it provides to give everyone here in Cork a fair chance, and the opportunity to reach their full potential.”