Minister for Enterprise, Trade and Employment

Simon Coveney TD is the Minister for Enterprise, Trade and Employment. He is also the Deputy Leader of Fine Gael. Prior to December 2022, Simon was Minister for Foreign Affairs and Minister for Defence.  He previously served as Tánaiste from November 30th, 2017 to June 27th, 2020, and Minister for Housing, Planning and Local Government as well as Minister for Agriculture, Food and the Marine. For the 6 month period to the end of June 2013 Simon chaired the EU Council of Agriculture & Fisheries Ministers where he was at the forefront regarding EU efforts in respect of Common Agriculture (CAP) as well as Common Fisheries (CFP) Policy reforms. Under his chairmanship both dossiers were progressed significantly, with a reform package for CFP agreed in May 2013 and a reform package for CAP agreed at the end of the Irish Presidency in July. The Defence portfolio was added to his brief on July 11, 2014. He represents the Cork South Central constituency.

Simon was first elected to the Dáil in 1998 as one of Fine Gael’s youngest TDs and held Shadow Ministries in the areas of Drugs and Youth Affairs, Communications, Marine and Natural Resources, and Transport. Simon chaired the Fine Gael Policy Development Committee prior to the 2011 General Election.

Simon was a member of Cork County Council and the Southern Health Board from 1999 to 2003. 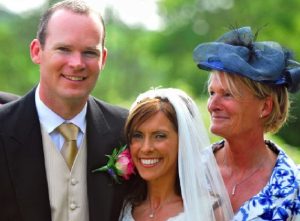 Born in Cork in June 1972, Simon holds a B.Sc. in Agriculture and Land Management from The Royal Agriculture College, Gloucestershire. He was also educated at Clongowes Wood College, County Kildare; University College Cork and Gurteen Agricultural College, County Tipperary. A keen fan of all competitive sport, he played Rugby for Garryowen, Cork Constitution and Crosshaven Rugby Club. In 1997/8 he led the “Sail Chernobyl Project” which involved sailing 30,000 miles around the world for charity. He is a qualified sailing instructor and lifeguard.

In 2008, Simon married Ruth Furney, and they now have three girls. 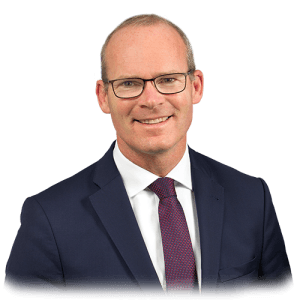