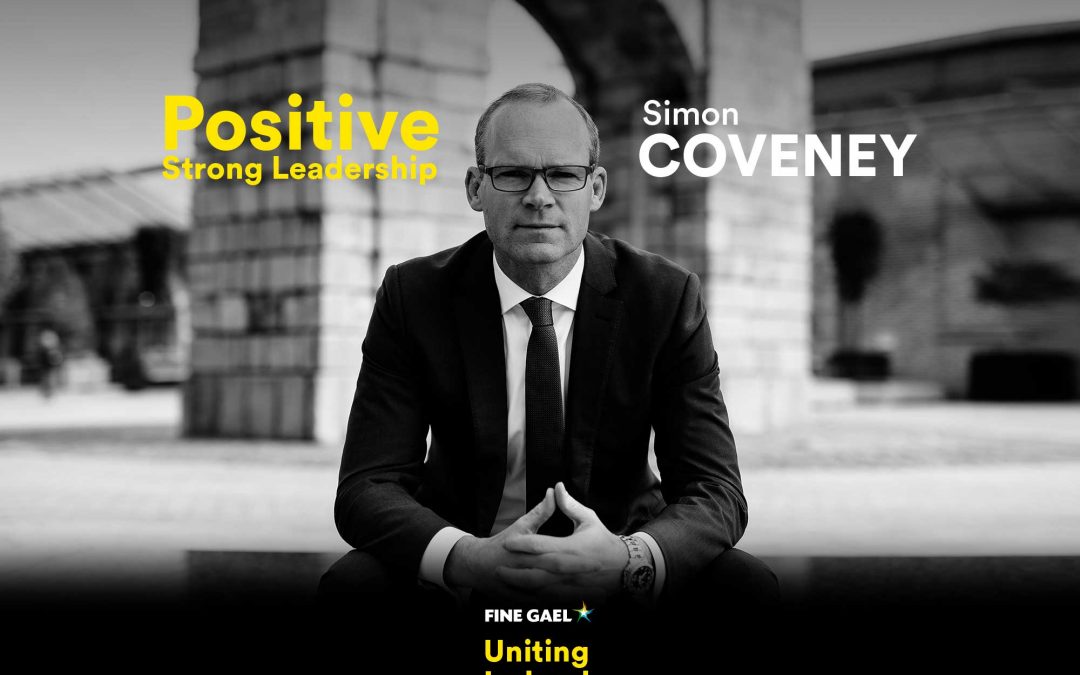 Commenting today (Sunday 21st May) at the publication of his roadmap to change Party, Government and the country, Minister Simon Coveney said;
“At a time of deep scepticism about politics in Ireland and elsewhere, I believe it is vital that every elected representative to declare what they stand for and to commit to the hard work of delivering positive change. That is the reason I asked to lead Fine Gael’s referendum campaign in favour of marriage equality and it is why I sought to become Minister for Housing.  It is why I am now running for the leadership of Fine Gael.
While I am optimistic about the future of Ireland I also understand the anger and frustration of many who feel that they have been left behind. Despite the very real progress we have made since the days of Costello and Fitzgerald, we remain a country with deep divisions. Our political system has splintered into a range of new parties and alliances, someof which represents only a narrow section of our population.
Some have argued that Fine Gael should follow suit. That we too should focus on our core vote and retreat back to the comfort zone of narrow tribal and ideological politics. I disagree. I believe passionately that Fine Gael must reach out to all of our citizens. That we should be a party for everyone which seeks to unite rather than divide. Our goal should be nothing less than the creation of a society in which everyone can participate, and an economy from which everyone can benefit.
If we are to successfully modernise Ireland to become a compassionate, tolerant and progressive society through Fine Gael leadership we need to do three things;
1. Set out a clear reform agenda for the Fine Gael party, drawing on the lessons we learned from the last General Election.
2. Modernise Government to make it much more effective at delivering ambitious policy goals; and
3. Deliver a clear vision for transforming Ireland into a country in which every person has the opportunity to reach his or her full potential.
(Appendix 1 summarises these three areas of reform with more details in the main policy document.)
What I bring to politics is positive thinking, big ideas and the capacity to get things done.”

Appendix 1              Three Agendas for Change & Reform
1.            A New Fine Gael to Drive Change in Ireland
The detailed reports in to the 2016 General Election result, by Marion Coy in particular, points to the failures at the last election and makes numerous recommendations to correct these failings.  If elected as leader of the party I will
1. Publish a detailed plan, before the Ard Fheis in November of this year, to show how we will implement those key recommendations in these reviews.
2. Ensure that everyone – members of the Parliamentary Party, councilors and party members – has a voice and that voice is listened to.
3. Prepare for the next election as the party with the most positive message, the biggest ideas, the clearest vision and the most effective campaigning machine.
2.            Reforming Government to Deliver Better Outcomes
In order to improve the efficiency and impact of how government works the Department of the Taoiseach should play a much more central role in long term strategic planning and delivery. If elected I propose to:
1. Appoint a strong Chief of Staff to make sure that all parts of Government work much more effectively together to deliver for the people of Ireland;
2. Establish a new Policy and Delivery Unit within the Taoiseach’s office staffed with expertise from both inside and outside government. It will be responsible for, among other things, preparing a whole of Government Ireland 2040 Plan by the end of this year. This will set out our key ambitions for the country over the period up to 2040 with deliverable action points for the period 2018-2021.
3. Put in place a Communications Team which will engage with the public around major policy developments in a much more positive and proactive way. I believe that the manner in which the 2016 Year of Commemoration was managed in this regard is a model of good practice.
4. I also propose to create a new Minister for Infrastructure who will oversee the Government’s public investment plan as part of the Ireland 2040 planning framework.
3.            Bringing People and Communities Together
While this section of the report contains specific proposals it is important to note that it is an ideas framework rather than a detailed policy document; a compass rather than a roadmap. It builds on the Programme for Government and the stability which it provides but emphasises certain key priorities of my own. They are;

1. Rebuilding Trust
It is crucial that we deliver a series of measures to help rebuild trust between the state and the citizen, including the creation of a new Anti-Corruption and Transparency (“ACT”) Commission with the powers of a High Court judge which will respond to whistle blowers and possible corruption much more energetically than is currently the case.

2. Post-Brexit Ireland: Building a Competitive Economy
This looks at how post-Brexit Ireland should maintain its competiveness in key areas such as taxation, skills and education, and strategic infrastructure. In order to ensure that Ireland is tax competitive I favour reducing the overall marginal tax rate (including USC and PRSI) to below 50%, and to widening the tax bands so that people don’t start paying the higher rate of tax at  the current low level of €33,800. It is clear that our SME sector also requires additional support, particularly as it responds to the challenges posed by Brexit.

3. Rebalancing Ireland: A New National Plan, Bridging the Urban/Rural Divide
To start rebalancing Ireland I see the need for additional ring-fenced strategic capital funding over the next two decades. That is why I am working on a new plan, Ireland 2040, which will set out a roadmap to achieve this. That plan identifies the key strategic investments that can help bring about that more balanced development. This additional spending will be designed to both boost growth and competiveness, and unlock the growth potential of the regions as the total number of people on this island continues to grow. It also contains a number of proposed measures to fight climate change and promote long term sustainability. I will establish a working group, to report by the end of the year, on how we can use green taxes to further our climate change agenda, taking into account my ambition to reduce the overall burden of tax.

4. New Cities and Stronger Communities
My goal is to make Dublin the most dynamic international capital city in Europe while targeting a doubling in the size of our other cities by 2040. I want to ensure that these cities have sufficient critical mass to act as effective counter balances to Dublin and that there is, in turn, real integration between the regional cities and their surrounding local areas. This area also looks at how Government can help the creation of stronger and more resilient communities both within and outside our cities.

5. Empowering Citizens through World Class Public Services
I believe that our Public Services should be judged by two clear criteria. First, how well do they meet the immediate needs of the individual. Second, and as importantly, how successfully do they help empower the individual so that they can reach their full potential. This section provides a number of concrete examples of how I believe the state can reform public services to help create more empowered citizens in crucial areas such as education, health and social welfare.

6. A Reunified Ireland
I believe that Fine Gael, following the decision by the UK to leave the EU, should develop a positive economic and strategic case for the reunification of Ireland over time and within the EU. But reunification, if it is to happen, must be about more than unifying territory or winning 50% + 1 vote in some future border poll. Fine Gael has always been about uniting communities and people – North and South. That is the only way to truly unite our island.

7. Positive Leadership Abroad
I believe that Ireland, as the only English-speaking country committed to the EU, is in a unique position to help shape the debate about the future shape and direction of the Union. I am also convinced, as a former Minister for Defence, that Ireland can play a stronger role through the UN in areas such as peace keeping and the protection of migrants and other displaced people.